Where is the meadow and what’s in it?

The meadow is to the north of the Pre-School building, bordering Robert Burns Avenue. It contains mature trees and a mature hedge, newly planted trees and a newly planted hedge, two logpiles, a number of leaf bins, permanent long grass for overwintering insects, and a wildflower meadow which is cut once annually. There is also a large mown glade and several mown paths, to allow children to gather for outdoor teaching and move easily through the meadow. 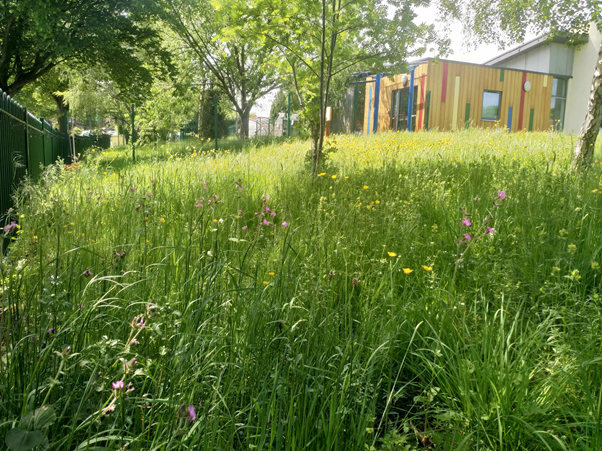 The creation of the meadow

Work on the meadow began in the autumn of 2019, when the site was a little-used corner of the school playing field. A group of parent volunteers stripped patches of turf, and in October-November the children sowed Yellow Rattle seed and a traditional meadow wildflower mix. Yellow Rattle is flower which is parasitic to grass, weakening it and thinning it out, allowing broadleaved plants to establish. Reducing grass vigour is a very important first step in transforming lawn into a diverse meadow of grasses and flowers. 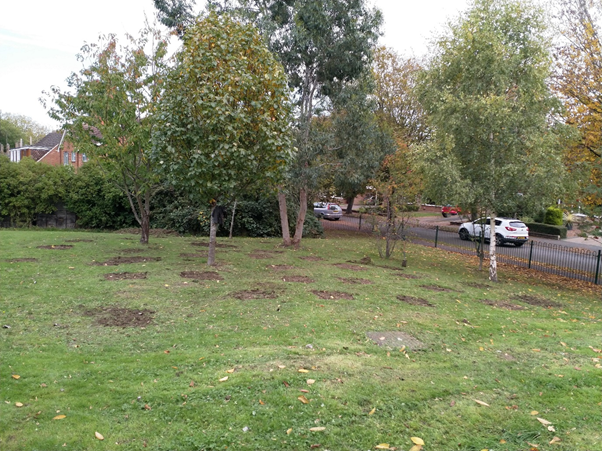 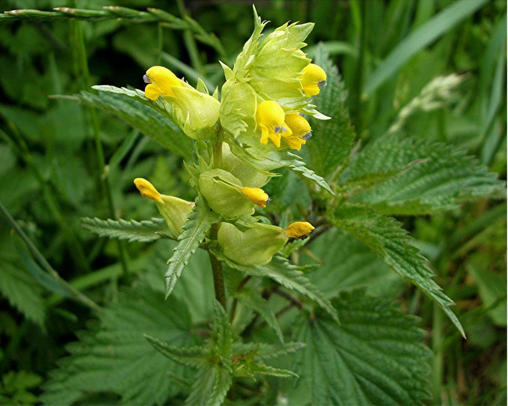 The leaf bins were made out of recycled pallets by the Men in Sheds community group (https://meninsheds-cheltenham.org/), and were placed on site in the autumn of 2019, along with the first log pile. A big thank you to the Men in Sheds, and to those who donated wood from their gardens and helped to transport it. The Men in Sheds also made six bird boxes, which were placed around the site in trees and in the hedge. 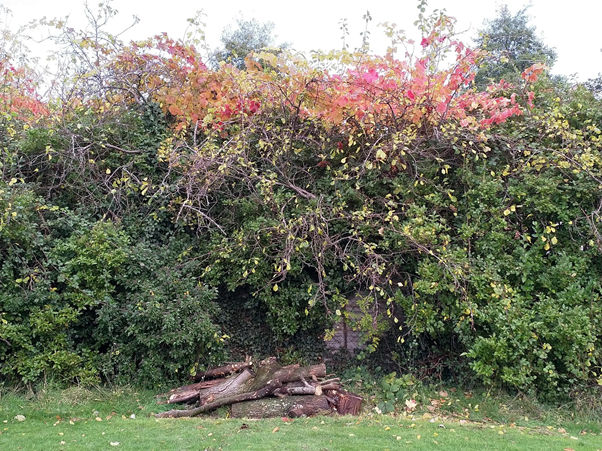 By late spring of 2020, we were seeing excellent germination of the Yellow Rattle seed, and also the very exciting appearance of a bee orchid. Many of the plants we had already observed in the sward (selfheal, speedwell, plantain, wood avens and black medick) flourished, and the traditional wildflower seed germinated and began to establish. 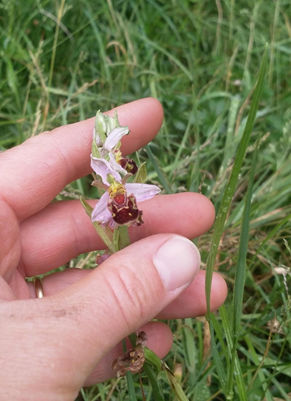 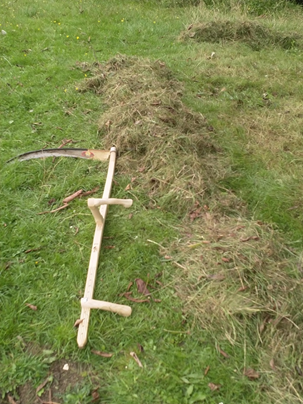 The meadow was given its first cut, by scythe, in late summer 2020. By late summer, most plants have flowered and gone to seed. The scythe cuts through plants and grass in one sweep, at the base, unlike a strimmer, which shreds and flings the material. The scythe cut makes it easy to collect, dry, and remove the hay to the margins of the site to rot down. The removal of the hay is very important, as wildflowers do best on poor soil, and so the land needs to be managed in a way that reduces soil fertility. This means doing the opposite of good lawn management, in which clippings are left to return to the soil.

That autumn, when we cleaned the bird boxes, we found that four out of five had been used for nesting. 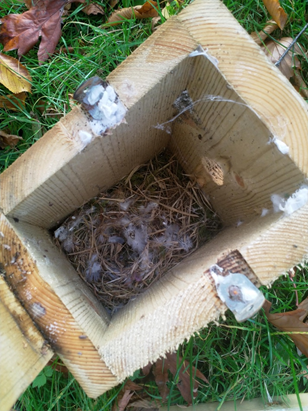 In April 2021, Benhall Infants School applied for trees from The Woodland Trust, available as part of their Big Climate Fightback scheme. The school received a hedge pack (dogwood, rose, hazel, hawthorn and crab-apple), and a copse pack (birch, rowan, and cherry), all whips. The children helped to plant these on the meadow, creating a new hedge along the boundary to Pre-School, and a belt of trees across the edge of the site bordering the playing field. The new trees were mulched with the hay and leaf mould from the site, and have been growing fantastically well despite the extremely hot and dry weather.

That same month, First Arb Tree Services kindly donated sections of a felled tree to create a second logpile, and also to lay along the top boundary of the meadow, where it meets the playing field, to stop balls from the football pitch rolling into the newly-planted trees. 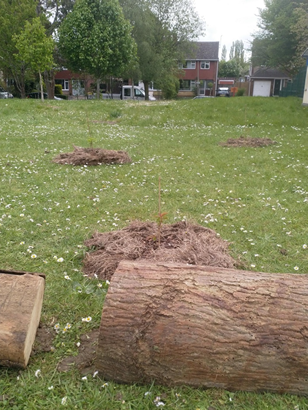 In the late spring and summer, we finally saw the traditional wildflower seeds sown in 2019 flower. Having established in 2020, these plants gave a beautiful display. 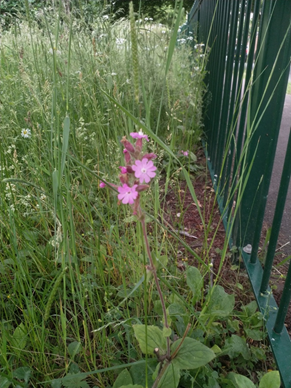 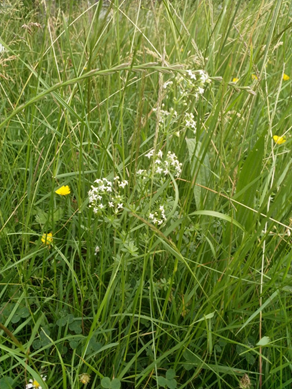 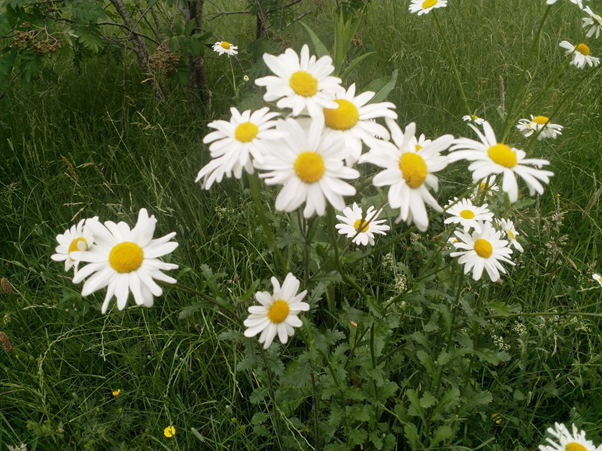 Alongside many bees, we also began to see butterflies in the meadow, including the Gatekeeper, the Meadow Brown and the Common Blue. 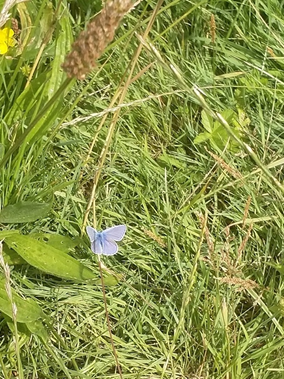 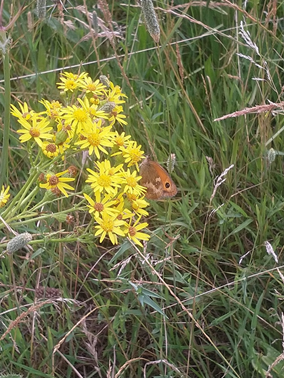 The newly planted trees also shot up, many growing over half a metre in height across the summer. We were very lucky to only lose two after planting – the survival rate for whips is usually much lower.

The meadow was mown, again by scythe, in August. Later in the autumn we will be sowing collected Yellow Rattle seed across areas of grass not previously seeded.

What benefits does the meadow bring to the pupils of Benhall Infants School?

The meadow provides a fantastic resource to the children, from learning about the life cycles of plants and insects and identifying the butterflies and birds attracted by the wild space, to hands-on experience of seed sowing and tree planting, to art projects looking at flower colours. The central glade is a place to gather, learn, think, and to connect with wild nature.

What ecological benefits does the meadow bring?

We have lost 75% of all insects in the last thirty years, because of pesticide use, destruction of wild areas, and climate change. Insects play an essential role in the ecosystem and in our food production, so this is a really serious issue – if the trend continues, we won’t be able to farm enough food to support our current population. Wild areas like the one at Benhall create oases of biodiversity (variety of life) where insects can feed, breed and shelter overwinter, and where predators such as birds, hedgehogs and frogs can find food. Allowing nature back into our urban landscapes in this way is one of the best ways we can fight back against the environmental crisis and protect the future for our children.

How will the meadow change over time?

It takes many years for wildflower meadows to fully establish, and they continue to develop as plants seed into the area and the soil changes. You will see, year on year, that the meadow does not look the same: there will be more and more flowers, and more and more wildlife. By comparing the ‘species seen’ lists above, you will see that the meadow in 2021 recorded eight more species than in 2020.

Where can you find out more about improving biodiversity in your own garden?

If you’re interested in helping insects and wildlife in your own garden, you can find useful information on the RHS website: https://www.rhs.org.uk/science/conservation-biodiversity/wildlife/encourage-wildlife-to-your-garden . Or feel free to approach me, Mrs Clark, around the school, and I’ll happily talk gardening!